This article originally appeared in print in The Source Weekly written by Anne Pick. 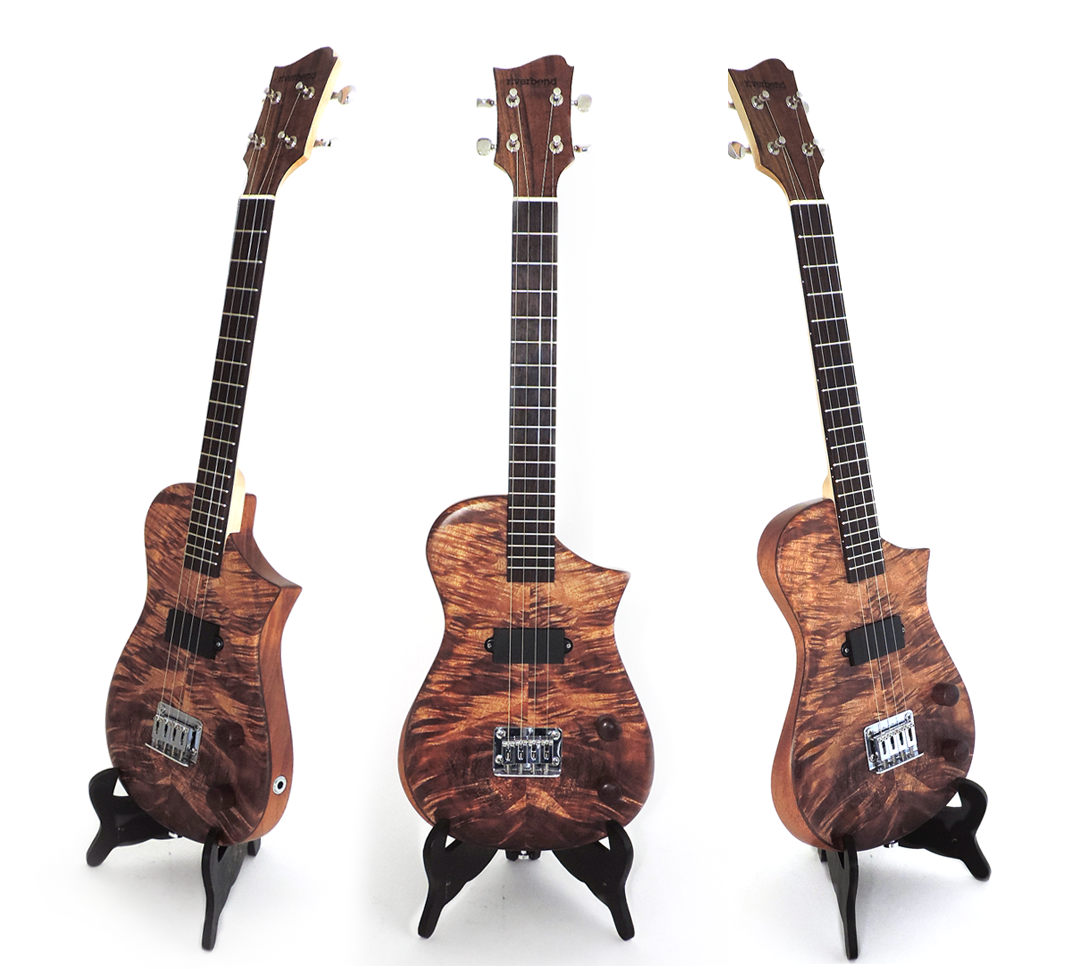 Plenty of big names and longtime residents come to mind when thinking about musical instruments made in Central Oregon. Usually though, those people build guitars. With that, Adam Mendel saw a niche in the market waiting to be filled: the electric ukulele. Mendel, a huge fan of Leo Fender, the man behind Fender electric guitars, saw a need for musicians and wanted to do the same thing for the ukulele that Fender did for the guitar.

“There are hundreds of incredible luthiers that can make acoustic ukuleles, but very few are doing electric,” Mendel says. “I thought it was a great time to give it a new voice.”

Mendel fell in love with the instrument after watching ukulele virtuoso and composer Jake Shimabukuro play “While My Guitar Gently Weeps.” Mendel has played music since age 12, including jazz band in high school, rock bands and orchestra. He always dreamed of making an instrument to play, and built a dulcimer and an electric bass before tackling the ukulele.

Mendel built his first ukulele and named her Oliver—because you have to love ‘all of her,’ even her flaws. Since then, Mendel has continued to refine his craft through his company, Riverbend Instruments. Mendel plans to rebrand in the coming months to incorporate his family lineage. Soon, Riverbend Instruments will become Joyner Instruments, a reference to the patriarch of his family on his mother’s side.

It usually takes Mendel six weeks to build one of his handmade solid body ukuleles. This isn’t his full-time job, but his goal is to make it his main gig by 2019. He recently invested in a CNC (computer numerical control) router, which he’ll use to cut all of his bodies and necks—a great time saver, he says.

Mendel says the ukuleles have been selling pretty well, which means he’s a bit low on inventory at the moment. He likes to have ukes in stock for people to buy and browse at his display room in Willow Lane Artist’s Creative Space, which he owns with his wife. Many of his favorite projects have been custom orders. He’s currently building a uke for the guitarist from traveling reggae band Hirie, who recently played in Bend with Indubious.

For Mendel and his family, every vacation is a business trip, because he’s always on the lookout for wood for his ukes. The Mendels recently returned from a trip to Hawaii where they spent time driving around the island looking for wood. Other people also reach out to Mendel and offer up pieces of wood that they’d had for 30 years. For Mendel, sourcing the materials is one of the joys of building these unique instruments.

“The benefit to an electric uke is the amount of voices it has,” Mendel says. “My goal is not to replace acoustic ukes, but for people who love the instrument, the electrics give them a new tonal palate to work with. You can go from really traditional to metal, all on your ukulele.

“Central Oregon is an incredible place and we have an amazing community of makers,” Mendel says. “That really drove me to get back into making. My background is in making jewelry. I’d been teaching high school and I was starting to get a little depressed not using my hands. The amazing community we have here inspired me to want to be a part of it and to get involved again. I think that the people that are attracted to Central Oregon bring the energy of entrepreneurship. There are so many creatives here, it’s a special thing.”

Something old/something new. I just finished this